Written by Danielle Beurteaux for Civil Eats. Published on April 12, 2018.

The idea began with a bin of discarded avocado pits. Where others would see waste, Drexel University Food Lab graduate students Sheetal Bahirat and Christa Kwaw-Yankson recognized an opportunity.

After some experimenting, they made an avocado-pit tea by blanching, grating, and then dehydrating the pit. The tea has a mild, slightly fruity taste and a pleasing, natural pink color.

“Everybody throws away their avocado pits—but we can make a tea out of the skins as well,” says Bahirat. “Which is great because this country is in love with avocado.”

Food waste is a hot topic, and startups are eager do something about it. But creating a viable food product company that relies on ingredients considered waste comes with many challenges.

The Food Lab, which is part of Drexel’s Center for Food and Hospitality Management and Department of Nutrition Sciences, has become the go-to R&D resource source for culinary innovators that aim to turn food waste—or “upcycled” food, as they prefer to call it—into consumer products. The lab recently received a two-year grant from the Claniel Foundation to help expand its upcycled food research and development.

Launching a startup food brand is difficult enough, but one that sources waste ingredients faces extra difficulties, says professor Jonathan Deutsch, who founded Food Lab in 2014, which works with major consumer packaged goods companies and entrepreneurs. For instance, food safety is a big concern, he says. It would only take one big health scare involving a food waste-derived product to put consumers off. There are logistics and regulatory challenges as well.

“When you try and do surplus food work in a food system that’s not really designed to do that, you reach additional hurdles,” he says. “What we’re doing is helping our clients through those hurdles.”

The hurdles Deutsch notes are not insignificant: A recent report published by the Food Law and Policy Clinic at Harvard University explores food-safety laws in all 50 states covering food donations—like foods that could be used for upcycled food products instead of becoming food waste. The results suggest that food producers across the country can be hesitant to donate food for fear that they could be liable for any food safety issues that arise.

Like Bahirat and Kwaw-Yankson, many other upcycled food entrepreneurs first see waste, and then think of a way to use it.

Daniela Uribe grew up amongst the coffee farms of Colombia. She remembers piles of cascara—the husk of the coffee cherry—that would either be used as fertilizer or dumped in the river. Her idea lightbulb went off when she saw Starbucks offering a cascara latte, and together with her co-founders, Erik Ornitz and Drew Fink, started experimenting with cascara tea in her kitchen. Lazy Bear Tea—a translation from ozo perozoso, Spanish for sloth—sells a drink made from dried cascara, which when steeped in hot water tastes not like coffee but like a smooth black tea. Lazy Bear Tea launched in 2017 and is now sold in 30 stores in the greater Boston area, with plans for expansion. 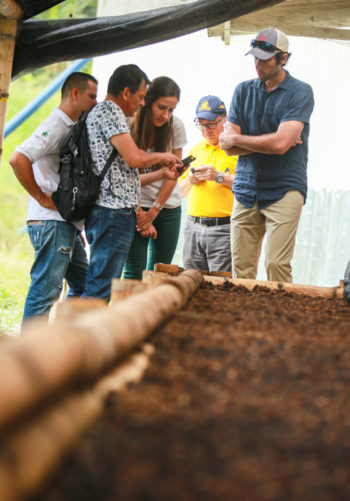 Apart from removing cascara from the waste system, the company offers a potential revenue stream for coffee farmers, most of whom, despite all those expensive coffees crowding store shelves, live in poverty. “That highlights how broken the coffee supply chain is in our agriculture and the system in general,” she says. “We’re using our tea as a vehicle for addressing some of those inconsistencies.”

Similarly, San Francisco’s ReGrained uses flour made from spent brewer’s grain—the used grain that’s left over after brewing—to make snack bars. Spent brewer’s grain is nutritious, and there’s billions of pounds of it produced every year—every 6-pack uses 1 pound of grain. While it can be used as animal feed, much of it is dumped. It spoils quickly, so ReGrained invented and patented a process that deals with the spoilage and transport. They collect the grains from mid-sized brewers, who welcome another source of revenue as well as the associated feel-goods.

“We’re creating economic value out of none and it’s also great story for them to tell to their customers about sustainability,” says co-founder Daniel Kurzrock.

Kurzrock and co-founder Jordan Schwartz launched ReGrained in 2013, and settled on snack bars because they’re a relatively easy entry point into the market. The company plans to launch new products and expand nationally this year. “We want to get to point where we’re the solution for brewing industry to handle this stream,” says Kurzrock.

Food Lab connected Kriti Sehgal, founder of Philadelphia’s Pure Fare restaurant group, with a provider of rescued sweet potatoes that are dehydrated and powdered. It’s used to make a sweet potato custard, one of their most popular offerings. Upcycling is a founding principal of the company, Sehgal says. But she cautions that there’s no point in using a surplus product just for the sake of it—that could mean more ingredients used to save one. “If I have to add more to that, how pure is that to the upcycling piece?” she asks.

Not every food waste entrepreneur is a hopeful experimenting in her kitchen. Drexel’s Food Lab has partnered with Philadelphia’s Philabundance, the largest food bank in the Delaware Valley region, to create products from foods that might otherwise go to waste for both their clients and retail.

This is partly driven by necessity and partly because they’re moving away from the canned goods food pantry model, says Philabundance’s deputy director of sustainability Kait Bowdler. They often receive large shipments of fresh produce requiring quick action before it spoils. Last year, that included 10 million pounds of produce over 4 months from the Port of Philadelphia alone, most of it one or two items; 2017 was a big year for grapes and melons.

As milk sales are decreasing, dairy farms are being left in dire economic straits. To address this issue, one of Philabundance’s first partnerships was with three dairy farmers in Lancaster, Pennsylvania.

Philabundance and other area food banks partnered with farmers who now make cheese under the group’s Abundantly Good brand. Local gourmet retailer Di Bruno Bros sells several varieties of the cheeses for $5.99 for 8 ounces; they pay a subsidy of one dollar per pound of cheese sold so that the farmers can continue providing free cheese to Philabundance—an arrangement that has supplied the food bank with 3,000 pounds of free cheddar to date. “It sort of uplifts the farmers and uplifts the clients as well,” says Bowdler. 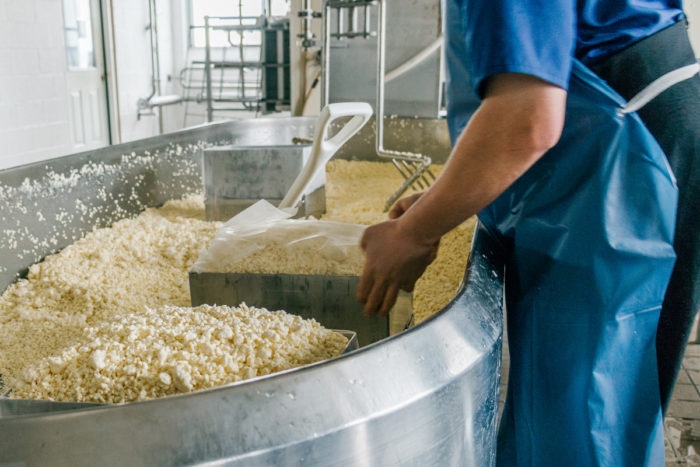 The same farmers became upcycle fans and also now use the skim milk left over after butter production to make skim milk yogurt, which Philabundance buys at low cost for its clients. “It lowers his cost of production and allows us to get a product as every time he’s making the butter for sale he can make a skim milk yogurt for us,” Bowdler says.

Food Lab is also helping Philabundance use its own culinary job training program to teach the skills needed to use surplus food. The goal for both Philabundance and Food Lab is to go beyond raising awareness about food waste, says Deutsch. “I hope the students are proficient in this field so that we’ve sort of trained an army of food waste preventers.”

Identifying an ingredient with high upcycle potential doesn’t mean getting it is particularly easy. Bahirat and Kwaw-Yankson say their requests for ingredients usually go unanswered. “We reach out to these companies and say, ‘Hey, we’re doing something with it, so can we collaborate?’ and we never hear back,” says Kwaw-Yankson.

That may be because there’s pervasive myth about liability, says Food Lab founder Deutsch. Restaurants, stores, and the like also don’t often have the resources to keep and package waste.

Uribe, of Lazy Bear Tea, knew that getting sufficient cascara wouldn’t be easy, simply because it’s not considered valuable by farmers. But by creating a product, she hopes they’ll be incentivized to process and sell it. Her company has worked on creating relationships with coffee farmers in the hopes of encouraging them to become suppliers.

Uribe says she and her co-founders also benefited from mentorships. They were accepted to entrepreneurship programs at the Harvard Innovation Lab and the Rock Accelerator at the Harvard Business School. They also joined Commonwealth Kitchen, a Boston organization that helps food entrepreneurs start and run their businesses. 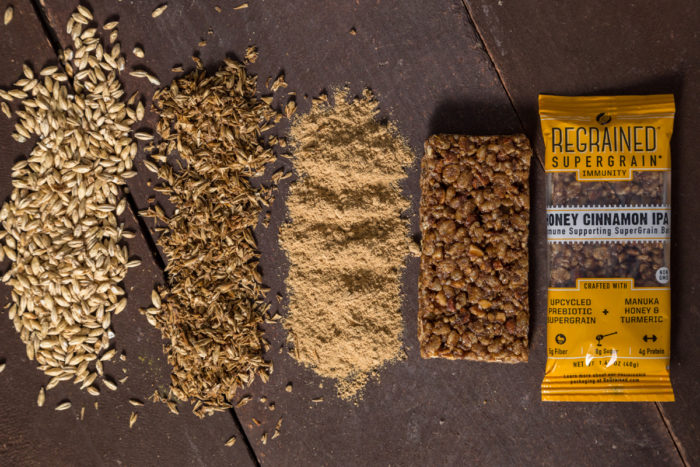 ReGrained bars and their ingredients (photo courtesy of ReGrained)

ReGrained partnered with the U.S. Department of Agriculture (USDA) to get outside assurance that ReGrained’s process was operating safely and efficiently (the USDA co-invented the company’s grain-stabilization technology). Co-founder Kurzrock also advises asking for help. “Everyone in this industry was helped at some point and they’re willing to pay it forward.”

The Semantics of Waste

But simply labeling a product as upcycled isn’t enough to win long-term customers. ReGrained focuses on taste and nutritional benefits over waste messaging. “Some consumers will buy our products because they’re upcycled, but they’ll only come back if it tastes great,” Kurzrock says. “The mass market is not necessarily seeking something that’s upcycled.”

Lazy Bear Tea’s Uribe agrees—taste first, messaging second. “If you have something that tastes really good with a really compelling story, people will become really loyal,” she says. “Especially if the upcycled waste-to-food story is something that resonates with them.”

While all these food innovators champion using otherwise-unwanted ingredients, one thing you won’t find on their labels is the term “food waste.” Consumers want to feel that they’re helping solve a problem, but framing is important. “If you put ‘food waste’ on package they’ll feel like they’re getting trash,” says Kurzrock. 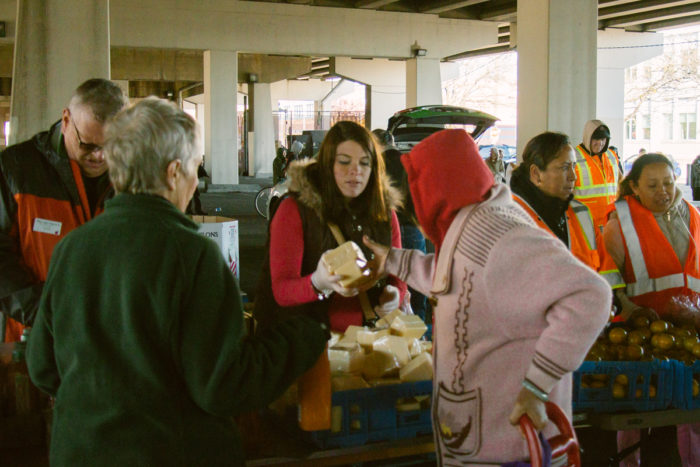 Philabundance’s Fresh For All program – A free farmers’ market-style program that delivers fresh produce and products including the upcycled cheese directly to people in need. (Photo courtesy of Philabundance)

Research published in The Journal of Consumer Behavior found that study subjects were receptive to a new category of food—they call it Value-Added Surplus Products—if it’s framed as upcycled. And the assumption that food surplus is equivalent to trash is something that all these upcycling champions are eager to dispel.

For one thing, much of it is hardly trash. Some food is rejected because of a market glut, or because of small things like strict weight specs—Philabundance has received bags of grapes that were only 2 ounces short of store requirements.

Upcycling isn’t about foisting off garbage to low-income populations, says Deutsch, but about closing the holes in food supply chains and using what we have. “We have one planet, we have all this beautiful abundance of food, let’s celebrate it both for people who need good nutrition and need food and people who want to enjoy a quality food experience,” he says. “And those are all the same people.”